Canadian writer Farley Mowat proposed that people came from what are now the northern British islands to the Canadian arctic in skin covered double-ended boats. They did this by island hopping via Greenland and Iceland over several generations more than 1,000 years ago. When they arrived they built a structure with dry stone walls and put their boat on top to act as the roof. The idea was popularised in his book The Farfarers.

In 2006 a group of enthusiasts built a boat-roofed structure in the writer’s home town of Port Hope, Ontario, Canada. 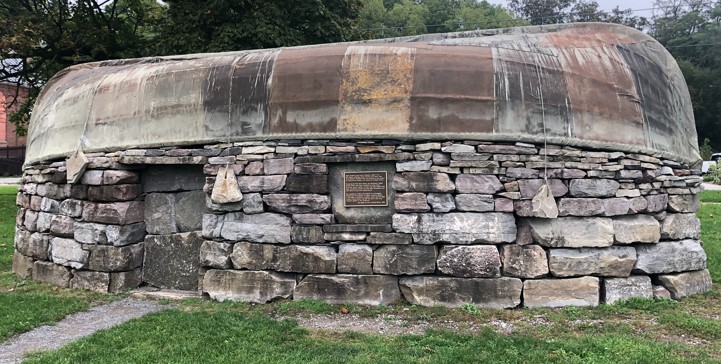 [Photo of the structure at Port Hope, Ontario, Canada by Wendy Craigen]

A plaque beside the door of the model reads…

“Eight hundred years before Columbus sailed to the New World, seafaring walrus hunters from Great Britain’s Northern Isles are believed to have landed in northeastern Canada, even before the Vikings arrived.

Venturing far from their homes, the adventurers sailed double-ended open boats sheathed in walrus hides. As winter swept a hostile, treeless land, they flipped their light, translucent vessels onto dry stone foundations and used them as snug, boat-roofed houses.”

As always with an idea like this, the first question is, “What is the evidence?”

Mowat’s idea was inspired by an interpretation of archaeological excavations of the remains of stone walls in the Canadian arctic that he argues follow the shape of the inverted gunwale of a double-ended boat. Of course, the wood and walrus skins of the proposed boat would have rotted away so there is no evidence for this.

The hypothetical boats were similar to the leather boat that Tim Severin used in his book The Brendan voyage. As Severin based his boat on historical records, then the idea of long sea voyages in skin boats is reasonable.

Is such a long voyage over generations feasible? Prehistoric people did amazing things with what seems to us to be limited tools, so yes, it is possible.

How much effort is required to build such a structure? In 2006, members of dry stone walling associations built the scaled down model of the proposed structure in Port Hope. They used 30 tonnes of stone in the walls to build the walls over three days and made a 7.6 metre boat to go on top. So it is feasible that a group of people could build a structure in a short time.

How common are boat-roofed structures? There is a similar replica in the Shetlands which appears to be part of a caravan park. 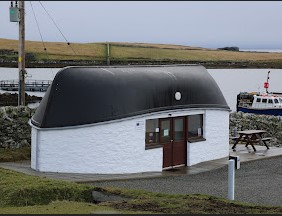 There is also a record from Historic Environment Scotland of a shed built in 1940 and roofed with a lifeboat from a steamer sunk by a submarine in 1939. The record notes that boat-roofed sheds were once common but are now rare.

In 1916, Shackleton’s party reached Elephant Island in two small boats after their ship was crushed by ice near Antarctica. “Our home on Elephant Island was built of two upturned boats laid side by side. Twenty-two of us lived like semi-frozen sardines within its cramped, dark interior.” 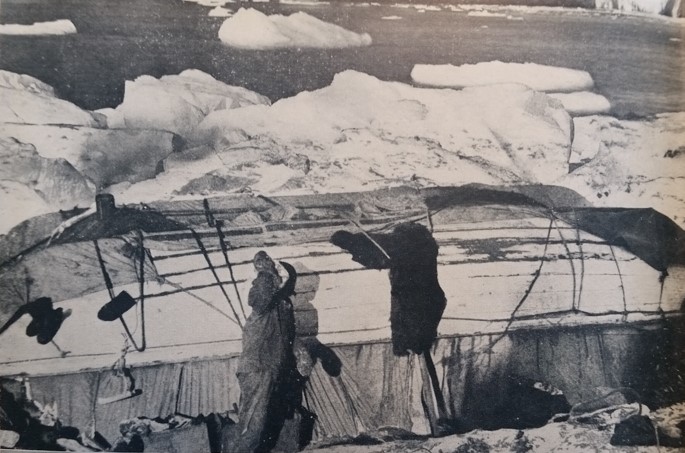 Boat designer Phil Bolger described two women who sheltered under their upturned rowing boat during a thunderstorm, so the idea of a boat-roofed shelter has parallels today in North America. By the way, they rowed 32km that day which gives you an idea of a reasonable distance that can be covered in sheltered water in a day.

So we can conclude that using a boat to roof a structure is feasible and a relatively well known option.

How strong is the archaeological evidence? Stuart C. Brown of the Department of Anthropology, Memorial University, Newfoundland, Canada, wrote that there is no evidence of a European presence in the archaeological data for the site at Ungava Bay, the site of the excavation which started the idea of prehistoric British seafarers building a boat-roofed building. He concludes by saying "Can I recommend The Farfarers? Most certainly! I have always enjoyed Farley Mowat's writing and his abiding fascination with Canada and its past. To this tale he brings the full powers of his imagination but, while it is entertaining as fiction, it is far from convincing as fact."

An article by Richard Ellis in The New York Times is blunt…
“Mowat relies here on the work of a kindred spirit, a maverick Canadian archaeologist named Thomas Lee. On the shore of Ungava Bay, Lee found evidence of what he believed might be ‘the earliest European settlement in North America' but no other archaeologists supported his findings and he had trouble obtaining funding for future projects.”

So we have different views of the crucial evidence, the tourist version and the version based on data. I think t was the boat designer Thomas Colvin who wrote, “Just because something is possibly possible does not mean that it is necessarily necessary.” I’d give the story on the plaque one chance in 1,000 of being correct. I certainly won’t be asking anyone to set out for Canada from Britain in a skin boat.

We encourage members to share their experiences –  a great day out on the water, a completed project, a request for information. - we'd love to hear from you.

We have 105 guests and no members online