Hands On Learning Australia is a programme committed to preventing the harm of early school leaving by creating opportunities AT SCHOOL for young people to discover their talents and experience success.

In addition to their normal schoolwork, participants in the programme are involved in “making and doing” at the school they attend. They have access to resources which allow them to learn life skills, and under the oversight of trained coordinators may also learn how to use the tools required for various tasks. For those interested, more at http://handsonlearning.org.au/ .

Towards the end of last year your club was involved in helping the Westernport Secondary College HOL group prepare for one of the fun events of the year – the annual raft race between HOL Schools, held at Mornington. 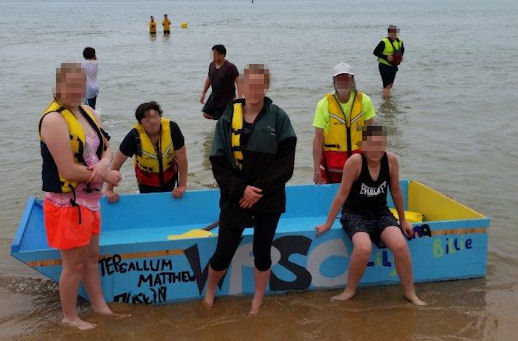 You may want to check out the only video I could track down of a previous race, and get a picture of what happens - https://www.youtube.com/watch?v=8m54rEKnKd8 .

Design is one of the keys to a good raft, along with simplicity of construction, availability of resources, skillsets of the builders, time constraints – and of course, floatability (is that a word?).

A number of designs were considered, and the suitability of many different construction materials was discussed – from plumbing pipes and car tubes, to large garden tubs and plastic barrels. In the end, the kind donation of a stack of packing ply from Cambridge Commercial Equipment – a commercial refrigerator supplier in Hallam – resolved the issue, and plywood it was.

Now, the sheets of ply weighed between 17kg to 23kg each, and the vision was for a crew of seven - 2 rows of 3 paddlers plus a helmsman with a steering oar – so with the weight of the raft (boat?) as well, lots of floatation was called for.

The initial “final” design was for two 30cm x3.6 metre hulls topped with 1.2 metre wide ply, which would have the capacity to bear approx. 650 kilos to the waterline. So that leaks due to poor workmanship and/or competitor sabotage could be minimized, the hulls would be filled with empty milk containers. Orders were issued for the retention of empty milk containers - starting immediately. (Cambridge Commercial Equipment also supplied a quantity of polystyrene sheets).

This ”final” plan was discussed with one of our “Real” boatbuilders , Bill Jones, who pointed out that the lower we could keep the ballast (“crew”) the more stability would increase. Subsequently a new “final” design was produced which called for a pram-like structure with high sides and of course provision for the built in flotation material (what would we do with all that junk otherwise!!!). 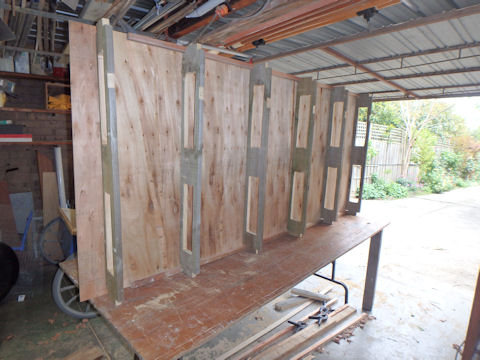 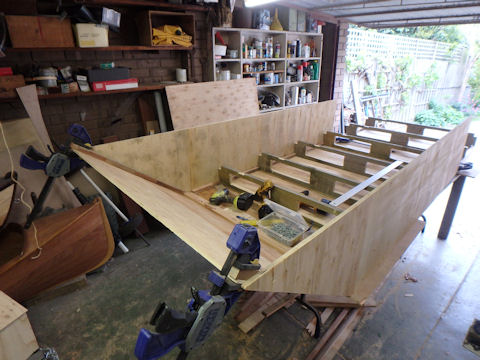 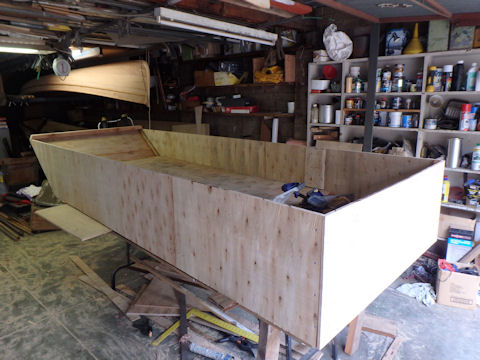 No matter how interested and enthusiastic they may be at the start, it is not easy to maintain the interest of a mixed group of young teenagers for too long, so the plan called for the raft to be prefabricated and then shipped to the school in an assembled but temporarily fastened state.

This was done, and the kids were able to see what it looked like before they disassembled it.

Kits for assembling and finishing 6 paddles and a steering oar were included, too.

You know, they were so enthusiastic! Sure interest waxed and waned amongst individuals, but not as a team. And team they were…. drilling holes for crews, nailing, glueing and caulking with liquid nails, putting the screws in, sanding, stuffing the hull cavities with milk containers and polystyrene, sloshing paint everywhere (and I mean –everywhere!) – they had a ball!! It was nice to be part of such a group. 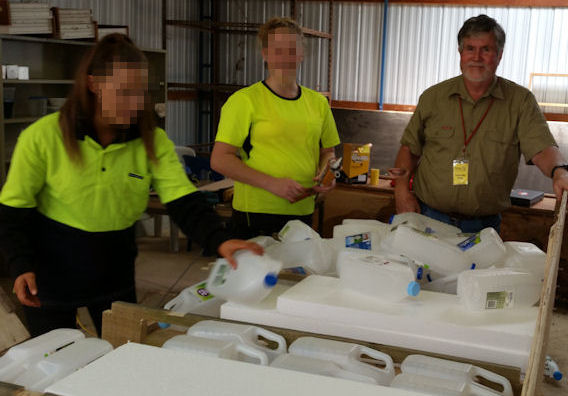 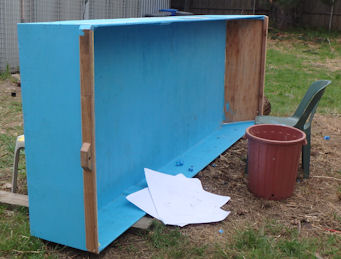 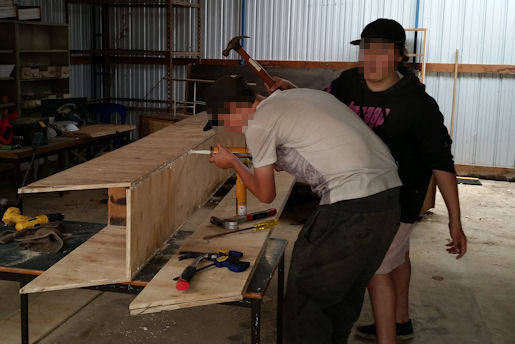 Well, our raft was finished and we had lots of material left over, so we started on a pair of 30cm x 2.4 metre hulls (as per our first plan) for use by another HOL school. The students from Elisabeth Murdoch College came along the next week to help finish and take away the hulls.

Ok. I know you are hanging out to know who won. I was unable to attend the race, but my informant told me that there didn’t seem to be a winner, that our team (pictured above ) was a worthy competitor, and that all the groups were having so much fun with their rafts and trying to drown each other that the race seemed unimportant compared to all the enjoyment being had, BUT……….

Yes, the hulls WE GAVE AWAY won the day! Still, as they say, “and a good time was had by all”.