"Maude" is for sale - see The Boatyard for details 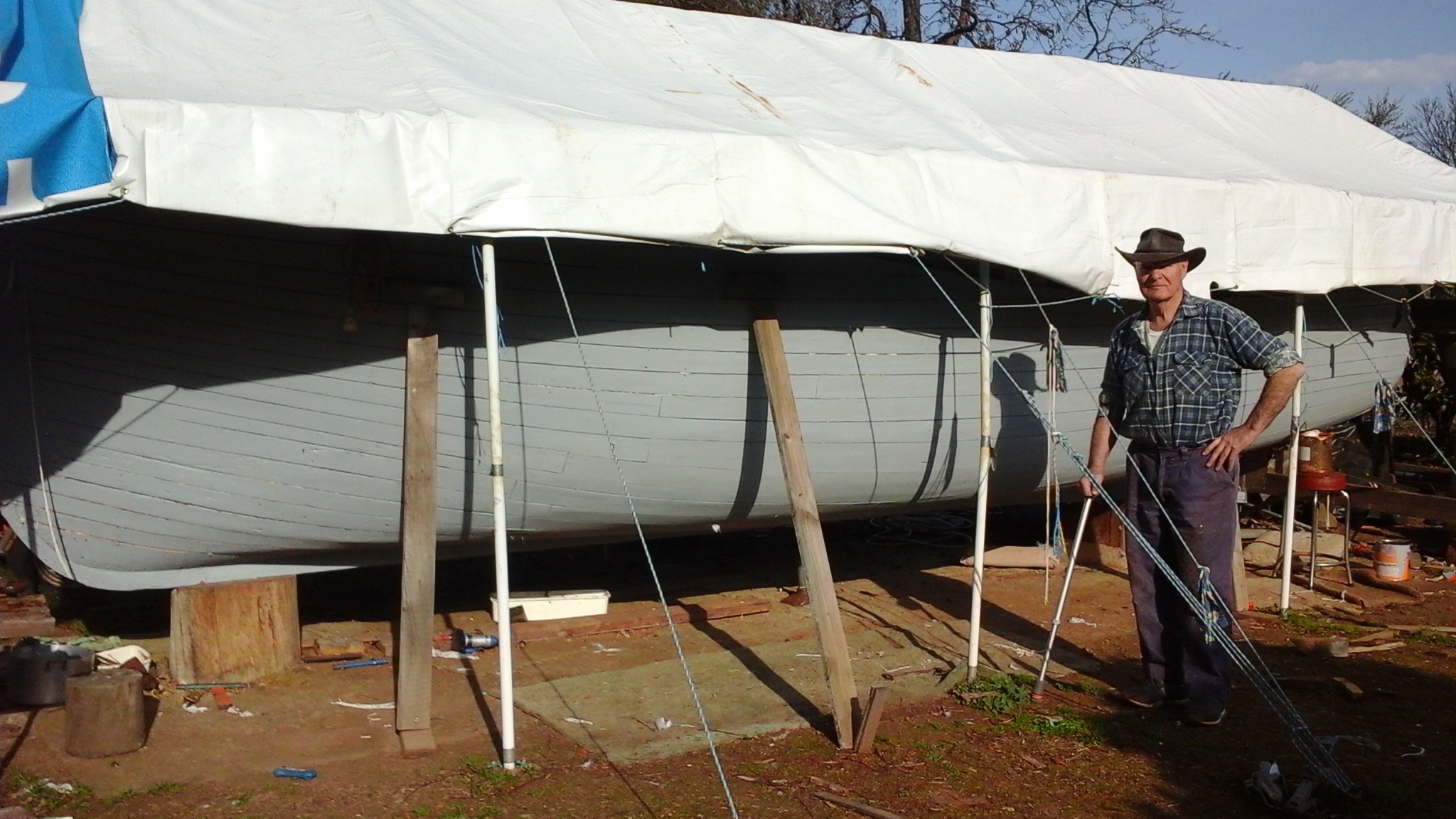 NOTE: Russ was the winner of the inaugural Alan Chinn Award in 2019.  The Award aims "to reward and show appreciation to a club member for their efforts in building or restoring a wooden boat, including model boats".

To restore a 26ft wooden boat to original condition is not for the faint hearted.   I am having difficulty in condensing a job of 1,000 hours and still getting it to be interesting to a reader. I am simply going to list the jobs to date and let your imaginations do the rest.

After purchasing Maude, we drove to Jervis Bay with friends.  There we gathered all the fittings etc. and prepared the boat to be loaded by crane onto friend Bruce Parris's Atkinson semi trailer, which had followed us from Nagambie.  Home again and Maude was unloaded (again with a crane) into our spare block.

We needed a bit of timber, so we felled a Stringy Bark tree and ripped out of it 50mm x 12mm timber for laminated frames.  The framing material was cut into 3 metre lengths, tied into bundles of 10, and dropped into the lake to soak.

The transom was removed and replaced with NZ Kauri.  How did we come by the Kauri?  it was given by Mr K Harvey from his original flour bins from his bakery!

The new frames were put in place.  The 50x12’s were removed from the lake as required, steamed, and laminated (in pairs) into position.  We used 2½ inch rivets to fasten them to the planks.  As you can see from the photos, a fair bit of replanking was required, and we installed 38 new Celery Top Pine Planks. 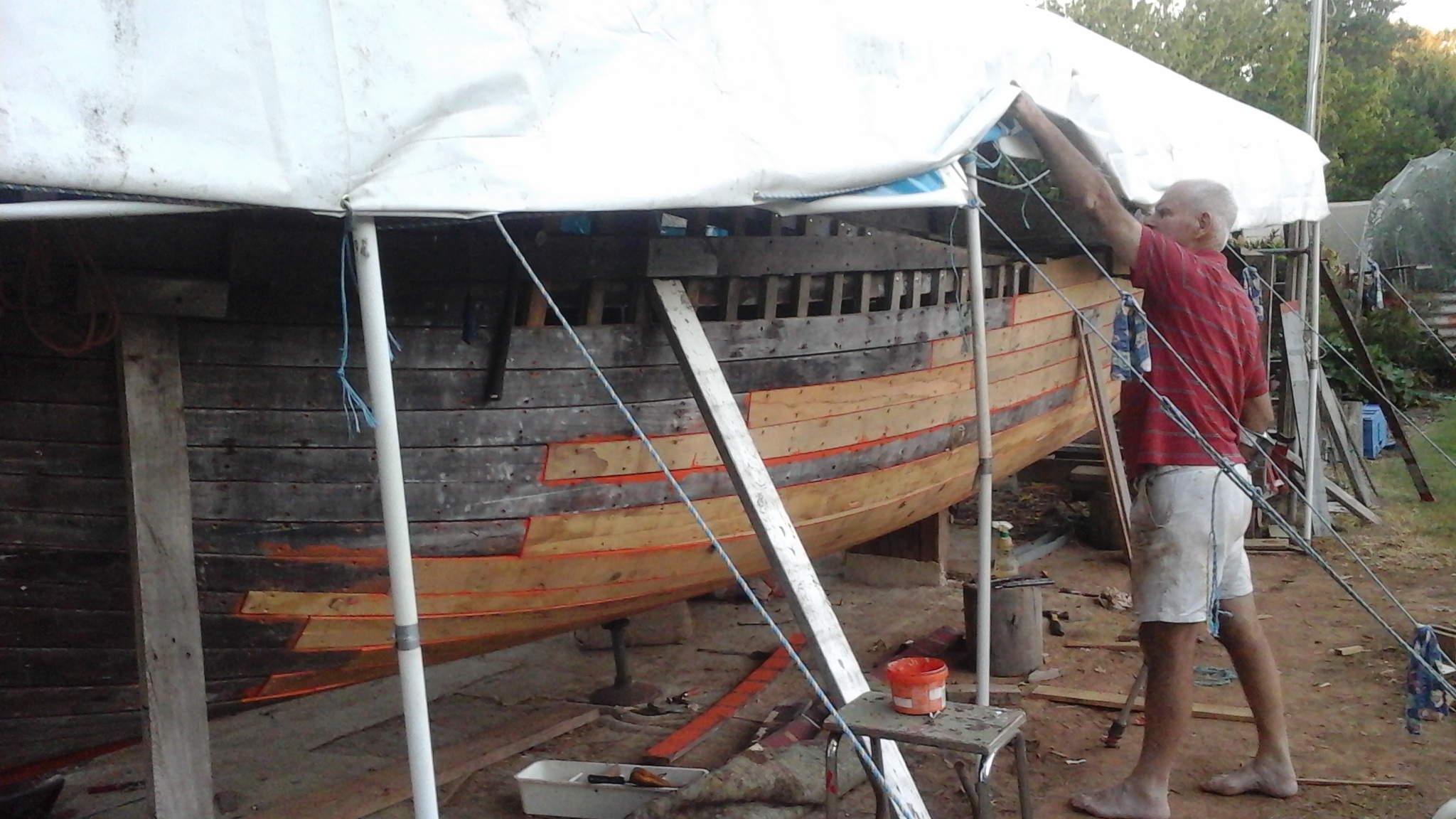 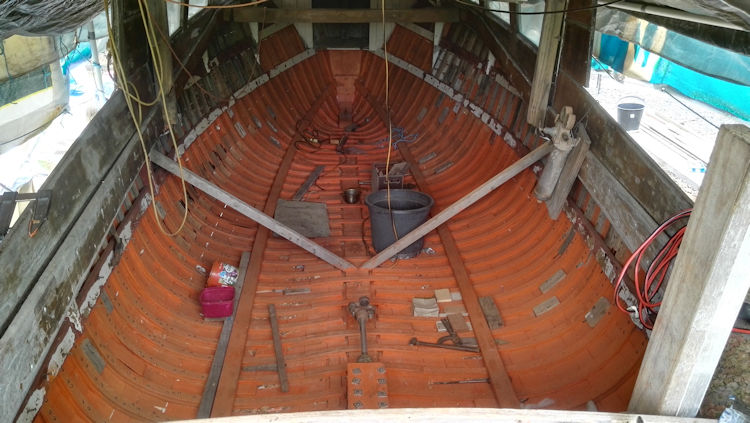 The propeller shaft needed attention too, and so we had to make and install a new Iron Bark " Log " Bearing.

Of course, this hasn’t been all down to me, and what a Back Up Team I have -  my wife Margaret, life-long friends Robert Mc Master [Bobo] - Jack of all trades; Lindsay Moore - Boiler Operator and Rouse About; Peter Smythe - Owner of other restored Wooden Boats; Bruce Parris - Mentor, Truck Man and generous mate; Christopher Hurren - engine restoration, cotton supplier, general dogsbody (and son); and … also Benjamin Lodge - occasional fire stoker, grandson.

Between us we have counter-bored for all the copper nails to 3/8", and plugged and glued all 3/8” holes with celery top plugs [even the dog was sticky] and trimmed off about 7000 of them.

What’s next?   The next job is to caulk the seams with cotton.  Please feel free to help!

Well, Maude is now finished, and has had a 2 week trip from Mildura to Berri since then. The trip was terminated at Berri due to a heatwave in January because - Russell forgot to install the air conditioner!   Try and get it right next time, Russell!

Maude is now at her new home in Nagambie