Okay, I already had the Joansa and the Rifleman, why another boat?

Well, we had thought at that time that the Joansa at 54 kgs was too heavy to rooftop (how wrong we were!), and when rowing solo in stronger winds it was difficult to steer because of the sheer at the bow. So with the help of Capt. Nemo, we set out the search for a smaller, lower profile hull.

Many options were examined and discarded, but eventually we settled on the Selway-Fisher designed 12 foot Thames Skiff. A classical look, a little narrower in the beam than the Joansa (Slithytove), and potentially considerably lighter to handle.

The design was presented as a stitch-and -glue project, but there was an option for a clinker ply build too. I like clinker, so I bought the plans. This was the first “upside down” build I had attempted, as both the Welsford designs were constructed “bottom up”. Accordingly I carefully studied the plans and suggested framing setup with interest, and put the frame and stringers together. 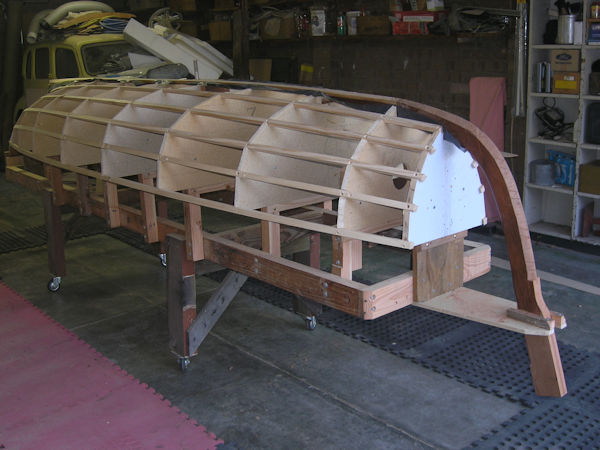 I spent a lot of time trying to get things right. I know, this should be the simplest task in your build, but I really struggled to get the frames settled in the correct positions. The technique of sitting the frames on elevated stilts didn’t lend itself to simple alignment in my view, but eventually I was satisfied with the layout. It turned out that I had undiagnosed type 2 diabetes at that time which was affecting my concentration and workmanship, and may have hindered my efforts, but never-the- less I was sure I would never use this frame setup again!

I made up 3mm MDF templates for the planks, and when happy with their fit, transferred the images to the 4mm ply scarfed sheets. 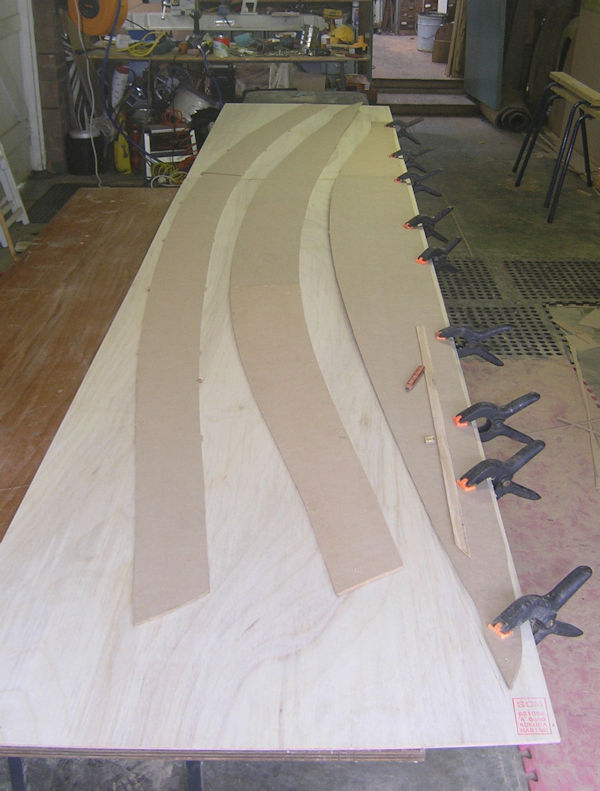 After fairing the Hog stem and transom as necessary, the Garboard was fitted and then fibreglassed. I wanted a tough bottom on the boat, but being clinker, each of the planks I had chosen for fibreglassing had to be glassed individually, slowing down planking while the epoxy set properly. 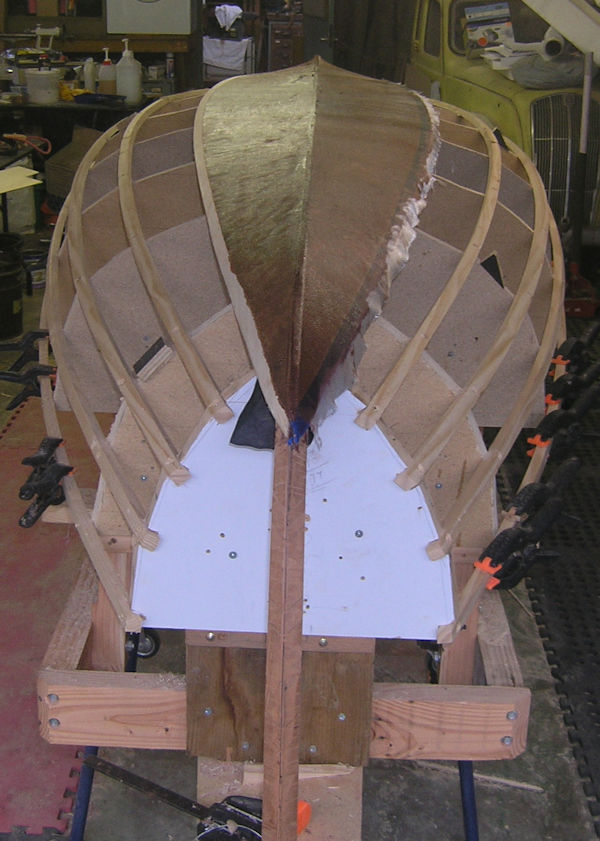 I tried as hard as I could to find ways that allowed me to not have to use screws as temporary fasteners, but in the end, parts of the boat got screwed! 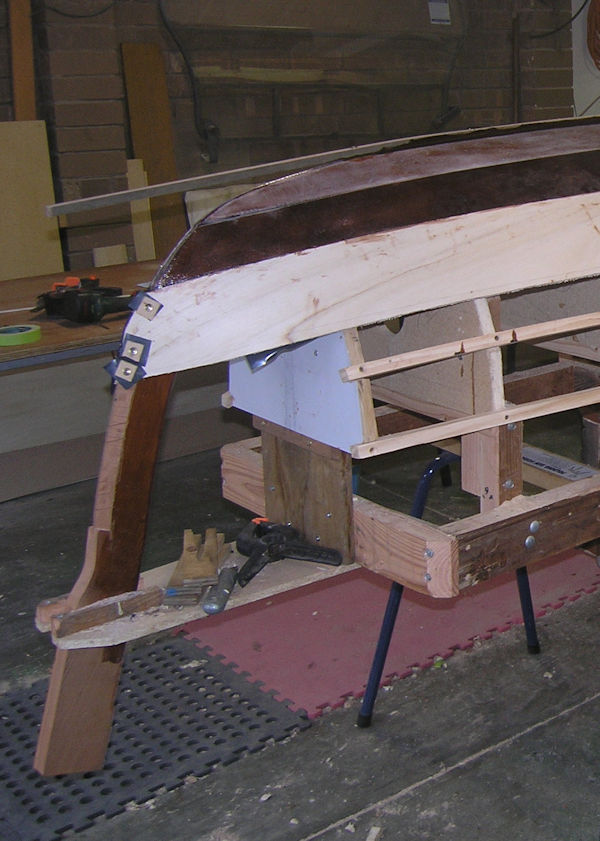 On this boat, the garboard planks are to be drawn together and then attached to the transom as the “stem” of the wineglass shape. I found this a bit daunting, so added an extension to the transom to give the garboard ends something to land on. I also found a couple of the bends around the transom area pretty challenging, and ended up using preshaped blocks to achieve the correct contact between planks and transom. 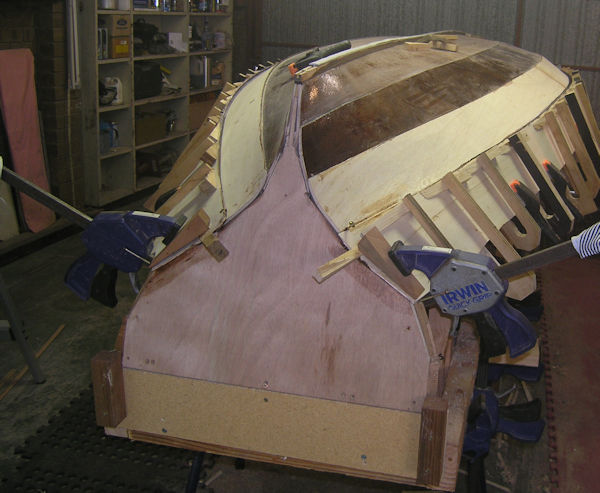 I chose a different method of fairing the planks for this boat, as I had found trimming them by eye a bit hit and miss for me. Realising that my stringers were already perfect lines, I simply cut my planks a little oversize, clamped them on, then ran the router along them top and bottom. Perfect planks!

As this boat was going to be used for both conventional and/or forward rowing setups, framing was iserted to allow the centre thwart to be used in multiple positions. 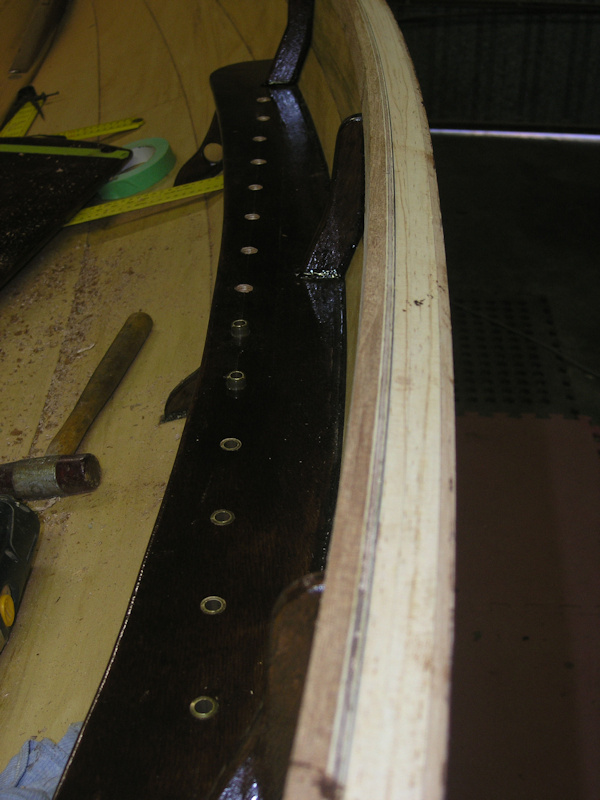 I know – once the holes are drilled for rowlocks etc. the thwart position possibilities are very limited – I confess, I overdid the positioning possibilities!

The gunwhale and inwhales next – laminated strips were used to simplify bending. The gunwales were thickened to compensate for the ommission of a fixed central thwart. 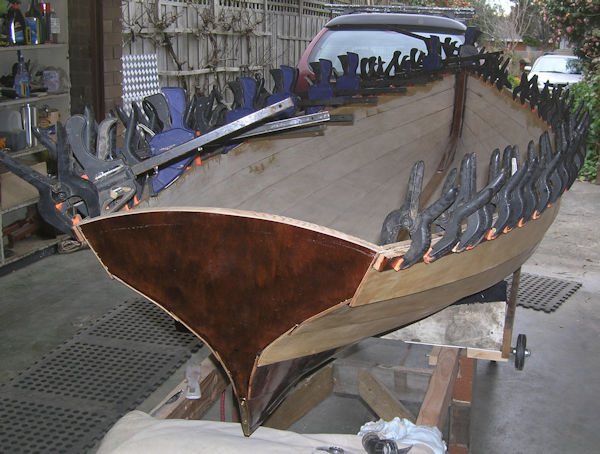 Planking finished and those terrible tasks of cleaning up, sanding, and putting on the 8 coats of Botecote and Aquacote done, thwarts and accessories completed.

Although I tried the trailer once, it was so much easier and more convenient to rooftop on the wagon, we have rooftopped the skiff ever since. 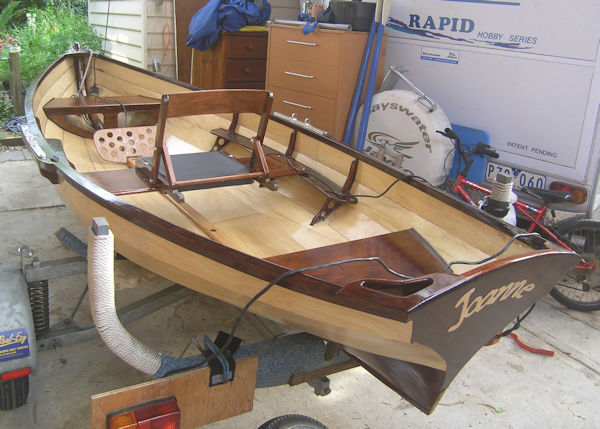 I have found this boat a great performer, easy(ier) to handle in the wind, happier with one aboard but ok with two, easy to move due to its 26kg weight, and stable at boarding, exiting, and in use. 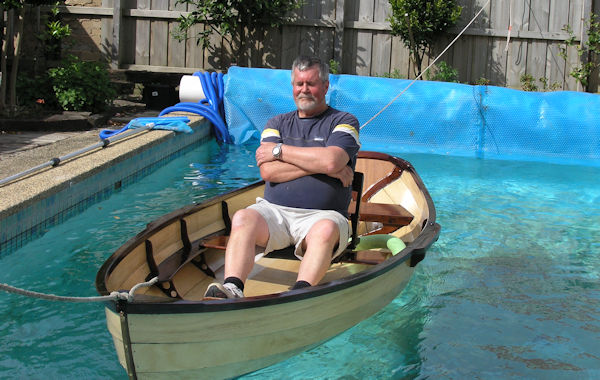 Time for testing and resting.
A nice little boat.