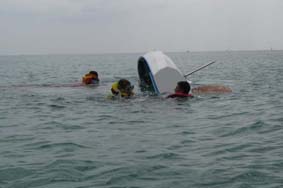 The Rye sailing day was an exciting one for Amelia and William, for a number of reasons. We got to snorkle around large clusters of Spider Crabs – often piled up to 10 crabs deep. The largest group was perhaps 5 metres across. Apparently related to breeding, the largest aggregation reported in Port Phillip (back in 2005) was the size of a football field!

We also saw a pod of dolphins swimming down the bay, but at that time we were a little busy – this was the day that we had chosen to perform a capsize drill! 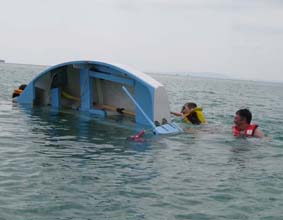 We sailed out from the beach, and over the sandbar into deeper water. With some trepidation Amelia and William joined Kirsty on the leeward side of our Coble. Once I moved over a bit the water poured in and we were all in the water.

The built in bouyancy chambers certainly provided more than enough bouyancy to keep the boat afloat, but the top of the centreboard case was underwater. We had discussed what to do if this was the case, and the sponges in our bailing buckets were stuffed into the case. Once Amelia and William moved to the stern the top of the case was out of the water and bailing proceeded quite quickly.  In short order we were all back aboard and making way, even with a fair amount of water sloshing around our ankles. 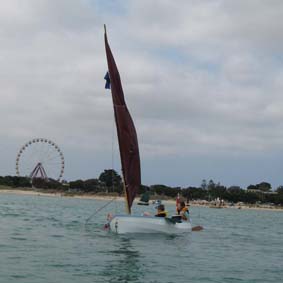 Amelia and William were comfortable enough with the process (they thought it was fun) that we did it again – this time with the centreboard locked down.

Why did we do it? Amelia and William had never capsized a dinghy before (although they had capsized their kayaks). As can be seen in the photos, the sea was flat, and the wind was light, so it was a good time to let them get used to the process, and learn not to be frightened of it. This takes them one step closer to being able to take this dinghy out on their own.

What did we learn? It helps if the centreboard is locked down, so that it doesn’t retract into the case. Because there is much more bouyancy in the stern, weight is needed there to get the top of the case out of the water. The “watertight” inspection hatches aren’t, and stuffing both chambers with all manner of empty 2 litre fruit juice containers with their lids on tight proved to be a wise decision (wine cask bladders would work even better to completely fill the volume, as long as there were no sharp edges). The hatches were out of the water when capsized, but once righted they were at least partially submerged, and leaked like the proverbial sieve. 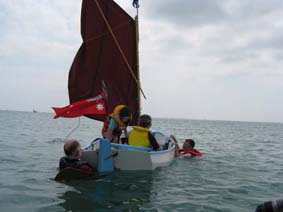