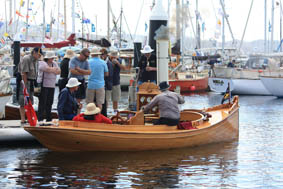 Several members of the WBA were in Hobart for yet another fantastic festival. Some flew, others sailed, but all had a great time!

David and Jenny Stott, Graham Signorini, Brian Flewell-Smith, Max and Elaine Wilson, Russell and Jenny Jones, and Peter, Kirsty, Amelia and William Batchelor were there from Melbourne, and there were probably more.  At least 15 East Gippsland members also attended.

See photos from the 2009 Festival 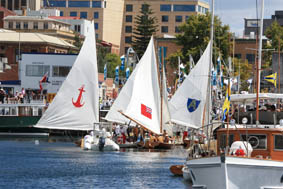 Friday was hot and sunny. Good crowds attended the opening and watched the mass sail from John Garrow Light to Sullivan's Cove.  I was able to catch up with Barry North on Peace Train, and Robert Ayliffe, on a Norwalk Island Sharpie.

The quality of the boats on display is amazing! One boat that we were looking at looked as if it was brand new, but it was actually a restoration of a boat built in the 1940s.

We couldn't resist buying a couple of tickets in the raffle for the next Perigrine School boat raffle!

The Quick ‘n’ Dirty boat building competition was keenly contested by 12 school teams, and their race on Sunday drew a large and enthusiastic crowd. The Community Boat Building display, where a number of boats were being built by community teams, to a very high standard, was also very popular, and I could have spent an hour or more just talking to the people involved. This is the sort of thing that I think that we should be doing when displaying at boat shows. 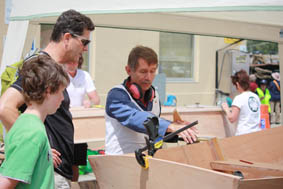 A community boat bulding project set itself the target of starting and completing a number of dinghys and skiffs in three days, and many of them were on the water prior to the quick ‘n’ dirty race. They fielded so many questions from the public during their build time it was amazing that they had anything on the water at the end of Sunday.

Another highlight was watching a fleet of 18’ skiffs set sail from Constitution Dock, and head out to race, water foaming away from their bows even before they left the harbour.

Boats were packed in everywhere: there were great sights, and fascinating people to talk to everywhere, and Young Endeavour, James Craig, Enterprize, Lady Nelson, and Windeward Bound added to the atmosphere.

See photos from the 2009 Festival.

Find out more about the festival at www.australianwoodenboatfestival.com.au. 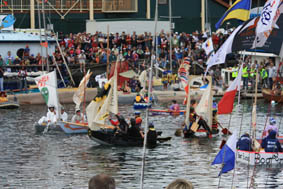 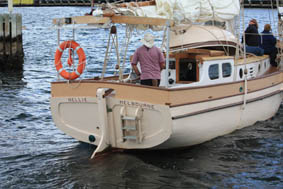