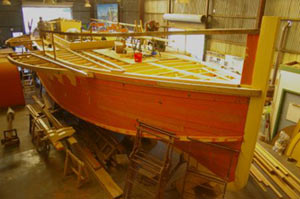 Paddle Steamer Curlip II is a replica of an historic paddle steamer of the Snowy River, in Far East Gippsland, Victoria.

A community project, her construction has utilized the traditional skills of wooden boat builders, and thousands of hours of volunteer labour. From December 2008 she will operate as a cruise vessel on the Snowy River Estuary exploring the natural and cultural heritage of this hidden gem of south east Australia.

The Curlip on the Snowy Festival, held Friday 28 to Sunday 30 November 2008, was written up in the December 2008 issue of Shavings, the WBA newsletter. Visit our Image Gallery for photos from the weekend.

Jenny and I arrived at Marlo on Wednesday for a couple for days of R & R before the rest of the gang arrived.  Already on site were Wal and Chris MacCadames, from Lake Macquarie with Sumwood in tow.

The Snowy River was showing the effects of the previous weekends’ rain, running very brown, and swiftly, we decided that it would not be prudent to launch as our little boats would not have the power to fight the current. We spent the day lazing around in the sun catching up on the news. Peter Braithwaite arrived during the afternoon with his Ultimate without mast.

Friday dawned cloudy but fine, so we decided to take a putt up the Snowy River towards Orbost. Apparently this river is barely navigable for very far as sand bars get in the way. Due to the recent rains we enjoyed a big wide river with plenty of depth, a glassy smooth  surface with wonderful reflections.  We cruised for about 12 km’s upstream to within about 4 km’s of Orbost. Starting off in flood plain we moved past dairy farms, and then temperate rain forest where we enjoyed lunch, although we did have to use the mossie repellant liberally.

Returning to the camp to get ready for our meet and greet, Steve Clutterbuck with the Weekender, Chris MacDonald, and Yolanda Filip with Thoura, Graeme Signorini with Nabira, Tony and Linda Remington with Ursa Geoff and Jill Carroll with Kibbee, Rob and Pat Ripley with the newly painted Pat arrived.

Elsewhere in Orbost Malcolm and Carmel Mckay with Sally Anne & Eric and Wendy Symes with Quest all from Narooma had also arrived.

Andrew Cohen and Marilyn Hill, Alan Chinn, Ernst and Beverley Drew, and rejoining on the weekend, Peter and Kerry Harvey from Metung together with the East Gippsland contingent arrived. Allan Barsch and Michael Snell paddle steamer crew from Echuca and who were there to assist the Curlip crew, also joined us. In all about 35 of us gathered for a BBQ.  The rain started and we huddled under available awnings and umbrellas.

Friday night saw us all at the local high school hall, for a great night. Live music was provided by the Briagalong Bush band where a traditional country supper was served and a great number of prizes donated by local businesses.  The theme was period costume and most went to a special effort to dress accordingly. The WBA had two tables with about 10 on each.

The band led us through several brackets of bush dancing which were easy for novices to pick up. In between time those dressed in costume were asked to parade before the judges including Craig Ingram the local pollie.

We had the best fun all for $25 a head, and before we knew it midnight had arrived, and the night was over

On Saturday the WBA provided a flotilla of around 15 boats to accompany Curlip downstream with whistles, bells and horns. The best dressed boat was the Remington’s Ursa resplendent with a mast full of flags. There was only one or two other wooden boats from the local area so the WBA group did a terrific job to make a spectacle of the event for the gathered crowd.

Sunday was a glorious day and a fleet of 7 boats, Penguin, Kibbee, Sumwood, Ursa, Pat, Unlimate, and Nebira ventured up the Brodribb river to Lake Curlip.

This also is a wide river but ends in the shallow Lake Curlip where we depth sounded with oars and boat hooks, deciding on a prudent retreat to a nearby lunch stop. Later after lunch Graeme Signorini in his canoe Nebira crossed the lake and explored the upstream part of the Brodribb.

Most left for home on Monday morning.  Wal and Chris MacCadames headed for home via Narooma, but Jill and Geoff Carroll, and Jenny and I enjoyed an extra day at leisure. It was wonderful to build on our weekend away last year on the Glenelg River, with a larger group and all agreed they had a fantastic time.

“Nothing daunted, nothing gained”.  That old saying was something to be remembered on Saturday, 29th November – the day chosen for the commissioning of the P.S. Curlip.  The rain continued from the day before with little let-up throughout the day.  However, WBA’ers are made of stern stuff and by 10am some of the boats brought from various parts of Victoria and NSW had been launched or were soon to be launched at the ramp down stream from the bridge across the Brodribb River.

Wet weather gear was the order of the day which unfortunately covered the costumes worn depicting the era of the first Curlip.  With a considerable distance to be covered to reach Marlo some boats began leaving around 11.  These boats stopped at Second Island to eat lunch and wait for the Curlip to come down the river.  The remainder of the boats waited until the Curlip got up steam then accompanied her all the way with the others falling in behind as they came to the island.
Boats included a foot propelled canoe,  dinghies (one that relied entirely on oarsmanship helped along its way by being towed some of the distance by the Coast Guard’s  jet ski), lake boats, off-the-beach yachts, trailer sailers, cabin cruisers and even a houseboat - a total of 20 boats.  Most were flying flags.  It was good to see that WBA’ers had responded so well to the occasion - the majority of boats were wooden.

Due to arrive at Marlo at 1pm the Curlip announced her imminent arrival from time to time by blowing her whistle.  Coming close to Marlo it was a wonderful sight to see so many people lining the foreshore and the bank, not deterred by the rainy weather.  The flotilla kept either abreast or behind Curlip, closely watched by the water police in their inflatable, and made several passes in front of the crowd, giving everyone the opportunity for a good view and to take photographs.

A helicopter was flying overhead, model boats were on display – two of them of the Curlip were given prize position in the water off the jetty where the Curlip tied up.  The official ceremony of commissioning was performed, also a smoking ceremony by a local aboriginal.

Several trips were made taking officials for a ride then the boat was open to the public for inspection.

The organisers must have been thrilled at the response from the public, the procedures of the day appeared to go off without a hitch and onlookers in their hundreds and participants were not deterred by the weather.

I went via Port Welshpool, which has several resident wooden boats moored, and was also holding sailing ship Enterprize on its annual voyage there. One direction is charter for a private girls school; the other is bookable by the public.

I had lunch in the pub with the friendly crew.