A Boat for a Cradle 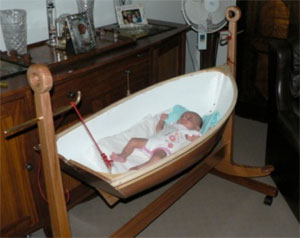 "I'm pregnant! " proclaimed my wife Liz as she excitedly passed me the test stick with the two blue lines on it. It was at this time that my heart skipped a beat, as I am sure it does for all males when they hear these words.

For me it skipped with excitement that sparked an idea. Maybe I could build a cradle boat like the one I had seen at the Tasmanian Wooden Boat Show when I was there in 2009.

As with all projects it began with research, and lots of it. Google got a workout but always seemed to return to the same places, American kit boat suppliers. These kit boats looked great and I seriously thought about it until I remembered that I had seen something about the construction of cradle boats in the WBA library. I rang Andrew Cohen to see if he was going past the clubrooms and if he could find out for me. As I have found to be often the case with Andrew, his commitment is superb. He made a special trip and found 'The Expectant Father's Cradle Boat' (Peter H. Spectre (1990) book which he delivered a few days later.

I read the book, then read it again. Contemplation with a healthy dose of indecision took hold. I have experience with restoring and working on wooden boats, but no experience with building one.

I decided on the ply wood pram design as this was simpler for the first time builder. I drew up my shopping list and was about to head off when a chance conversation with my father in-law, Joe (who was visiting from Port Macquarie) revealed that he had come across some Red Cedar and Tasmanian Oak which was waiting for a worthy project. He liked the idea of the cradle boat and gave his blessing for me to use it. Thus returned the indecision.

I slept on it that night and decided to attempt the Bahama dinghy. This cradle looked much better than the pram, but was much more difficult in the building process for the first timer. Over a coffee, Joe and I went about figuring out the dimensions and quantities that he would have to send down when he returned home.

As a child of the modern metric world I found that the first lesson of boat building I needed to get my head around was that of Imperial measurements, or more importantly their love of fractions. My Father in-law revelled in it as he was returning to a system he could understand and quickly worked it all out.

Two weeks later I had a box filled with timber couriered to me and the race to deliver began. 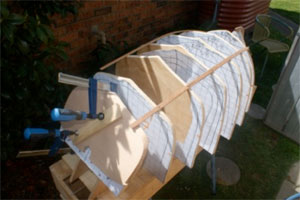 The book was relatively good in its explanations and plans, so I quickly had the stations assembled, ready for the strip planking to begin.

I rang my friend Roland who had the machinery to quickly turn the cedar boards into strips ready for planking. He also donated some Huon pine for the gunwale and knees. We then sat down in the afternoon sun and discussed the process of construction while sampling the 'single malt' payment.

The actual process of strip planking began rather easily and I was quickly lulled into the perception that it would remain so. Then came the turn of the bilge. Snap, crack, and pop went my pre conceived ideas that this would be easy. To make matters worse I hit report writing time at work which became all consuming. Planking ground down to a few planks a night, sometimes less as I continued to crack and snap. Then by chance I discovered that laziness can be used to an advantage. After shaping a plank and clamping it to the hull to test its fit, I was too tired to bother taking it off in readiness to epoxy it the next night. So there it stayed, bent around the hull. I am sure that for anyone who has built a boat, this would be a logical process, but for me it was divine enlightenment. The following night the plank remained in the curved shape and went on in no time at all. More importantly, without debate. Thus the two night process began and construction increased in pace again.

As December rolled around I was almost finished. I had a few planks to go, then sand and epoxy the outside and I would be finished. I was quietly confident that I would have it finished prior to the delivery date of our child. 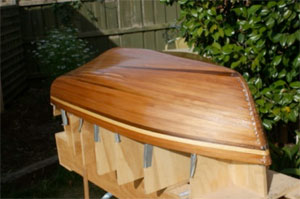 Then in came the doctor who informed us that due to medical reasons we would have an early delivery and in the weeks leading up to that, we would have to go into the hospital regularly. So with the final stages of school reports and now this, again the cradle ground down in pace.

My father Phillip volunteered to build the stand. Using Tasmanian Oak and Marabou he built it in the form of admiralty anchors at each end with the boat suspended by ropes attached to the stock of each anchor. The stand looked fantastic on completion and suited the theme beautifully. My wife was delighted as it allowed the cradle to be rocked with little more than the push of a little finger, while remaining remarkably stable with the baby inside.

Laura was born on the 16th of December 2010, weighing only 2.1kg (4lb 12oz). We were told that she would be staying in hospital for an extended time so this worked to my advantage in a way. Being that my wife was on a recovery bed it was decided that I would go home each night. So each morning I got up a little earlier and did some of the cradle before heading to the hospital.

By the time I had completed the glassing and painting of the hull with Aqua-Coate Laura had been home for a few weeks, but the completion of the cradle was worth it.

When we placed Laura in the cradle for the first time she lay there enjoying the soft rocking motion. 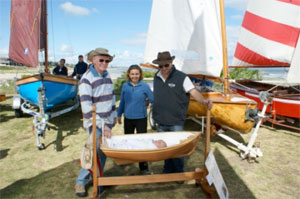 Laura, Phillip (My Dad), Liz (my wife) and me at Mordialloc Wooden Boat Show.