We were very sorry to read Alan Chinn.s report of the death of Jim Whiting, and embarrassed that we had not known. Thank you Alan and it indicates how few of the East Gippsland Branch have been around. Jim was a respected and loyal member of our branch. Jim was a quiet member, but with interesting comments to make. During my time he attended almost every meeting. In fact at the last AGM the Helmsman gave Jim an award recognising him for continuous support and attendance at activities.

Where have our members been? Currently Barry and Jenny are in Thailand and thinking that it would have been drier on their boat Peace Train than in Bangkok. Colin McArthur has just returned from central Australia and the Flinders Ranges where he had almost enough water to travel in his motor cruiser Ibis. Doug and Marian Gullickson have just returned from 10 weeks in Europe, England, Scotland & Ireland. They enjoyed 2 weeks canal boating along the Warwickshire ring in England and later followed the magnificent Caledonian Canal by road in Scotland. We (John and Jacqui) have just returned from 2 months in Canada where we traversed the continent by train. We fell in love with all the magnificent harbours with their beautiful fishing villages, with so many it is no wonder they ran out of cod. Away from the coast there were lakes everywhere with holiday villages. The Newfoundland branch of their equivalent of the WBA was meeting in Trinity when we were there, but unfortunately by the time we learned of this we had to leave to catch a ferry back to Nova Scotia. 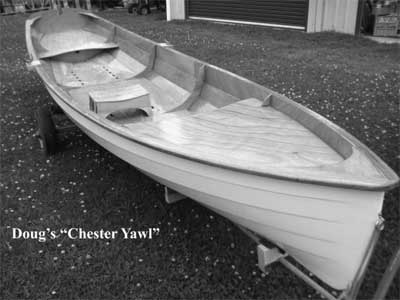 Nine of us plus eight O'Kelly family members met on Sunday 13th at the Progress Jetty Paynesville. Bernard had sailed Nelly to the meeting and Doug Gullickson brought his newly completed Chester Yawl to adjust the seating position. After lunch Bernard took his family out on Nelly for a tour around Paynesville. Doug launched his boat, rowing, and measured a suitable comfortable and balanced position.

Like all of us, Doug has been building this Chester Yawl for a number of years. It is of “Lapstich” plywood plank construction epoxied together. It came as a kit from Chesapeake Light Craft. The rowing boat has a length of approx. 4.57m, a beam of approx. 1.1m and weighs approx. 45kg. Designed by John C. Harris it has frames, and floors to provide a flat surface and open up the interior of the boat. This means there are no thwarts fall over. The Chester Yawl is based on the working boats of the 19th century such as the “Whitehall” boats of New England with a distinctive plumb bow and “wineglass” transom to produce a nice looking craft. In this instance “yawl” doesn't refer to a sailing rig but to the much older definition of a small craft carried aboard a large vessel to carry the Captain ashore on his errands.