On the 12th and 13th January members and their boats of the EGWBA sailed to Nungurner to rendezvous for lunch. The vessels included; Jabiru, Moongalba, Nellie,Peace Train and Ticketyboo. The weather was ideal and most arrived at about noon and following berthing and tie-ups, immediately started to barbecue, prepare and lay out their lunch. Apart from the usual conversations regarding wooden boats and recent adventures on the lakes there was much discussion about the upcoming Wooden Boat Festival in Hobart at which two of the Association’s boats, Bernard O’Kelly's Nellie and John Mulligan's Moongalba will sail to Hobart to represent the EGBA and enjoy the Festival attractions. We wish them smooth and happy sailing together with a safe return. I think we are also hoping to see lots of images and hear the stories and news from the attendees regarding the Festival.

There were some members and guests who came by vehicle and later all were included in a group photo to mark the occasion. It was particularly nice to have all of the members of Bernard O'Kelly's family present with an overall 23 attending. Doug Gullickson was keen to show the recent work that he has done on Jabiru and also sailing preparations recently completed for the sailing of Moongalba and Nellie. All agreed that the day was a success after which folks parted and sailed away. 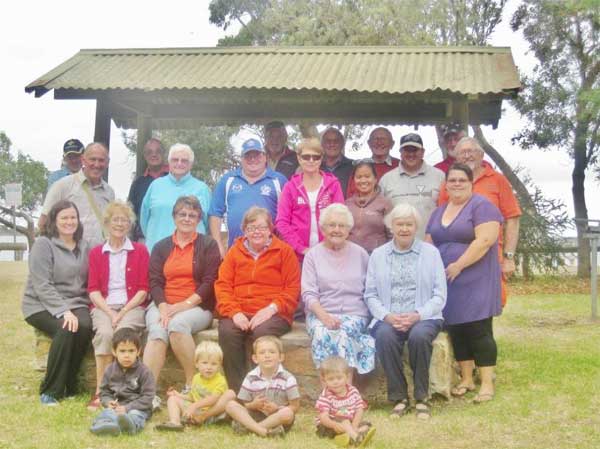