The loss of the Minesweeper Goorangai in a collision with the Troop carrier Duntroon just inside Port Phillip Heads on the night of 20th November 1940 was the subject of Andrew’s first presentation. Andrew has researched the incident in great detail, including use of material that has now been declassified. He has reached the view that the commonly circulated explanation of what happened and the findings of the enquiry at the time are incorrect in a number of respects.

Since all 24 personnel on Goorangai were killed in the incident, there are no witnesses from that side of the story. Goorangai was said to have not been showing its navigation lights, but a number of witnesses corroborate the fact that they were lit and Duntroon had turned down its lights in preparation for leaving the bay.

An article about Andrew’s research was published in the Age on April 22 this year. The grave of an unidentified sailor, buried at Williamstown cemetery 70 years ago, has finally had a headstone erected as a result of Andrew’s work.

Hanh provided us with a platter of Vietnamese delicacies for supper while Andrew set up for his next presentation on the Wooden Boats of Vietnam and the Mekong River. Andrew Cohen and Kerrin McNolty also brought some additions to the supper. 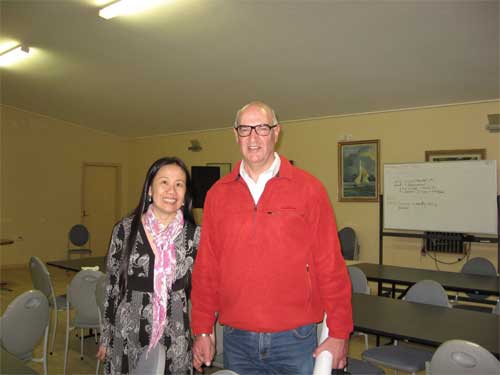 On a visit to Hanh’s family in Vietnam earlier this year Andrew and Hanh took photos of the local craft plying the river. Andrew said the boat handling skills of the people were remarkable owing to their everyday life being based around boats as the main or sometimes only means of transport. Many live aboard their boats also and rarely set foot on land.

The smaller river boats are simple, elegant double-enders made from a few full length planks. Fibreglass copies are now appearing due to their expected greater longevity. Larger boats and barges used on the Mekong are now mostly made of steel.

We were shown photos of coastal fishing boats which have very sweeping sheer lines and are painted in bright colours. Maintenance and refitting activities made for some interesting shots, including the blessing ceremony at relaunch.

Andrew and Hanh’s photos focused on the innovation and improvisation that seems to be the key to successful boating ventures in Vietnam (and here too I find).

There were photos of the “longtail” propulsion systems which are home made from whatever suitable sized engine was available.
Old truck motors look unmanageable but obviously work. Small motors from all backgrounds are customized to sit on the longtail tiller yoke. Cooling systems and fuel systems are then cobbled together to get the thing going.
Three new members attended the evening, John Muir, Neil Murphy and Ian Temby, each with interesting projects and boating stories to tell us. WBA President Chris Kelly is in Europe at the moment, passing the Lorelei rock on the Rhine tour today, according his text message.

Our thanks go to Andrew and Hanh for providing us with presentations on two topics which we were much better informed about by the end of the evening. 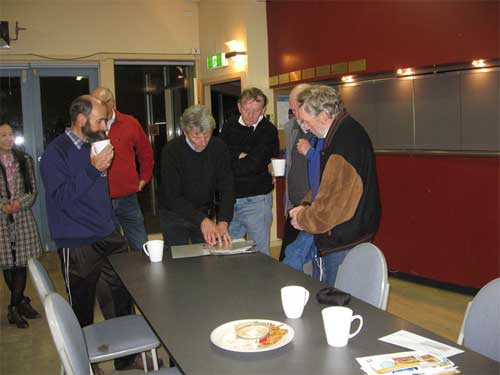