Roderick Smith emailed me recently concerning an article published on Rubeena, which is now taking passengers on short trips near Sale twice each day.

“The article covers much of the history. Working from memory, it was built for Sydney Harbour, then came to Lakes Entrance.

It became part of the Peel fleet of pleasure cruisers, based at Lakes Entrance, and was the smallest vessel. I have never stitched the history of that fleet together, but I do have some research notes. My father photographed Bellbird with Krunulla on a North Arm cruise in 1947, also Bellbird with Blackbird and an unidentified boat (probably Krunulla).

In 1963, my first time at Lakes Entrance, the Peel fleet was Blackbird, Bluebird (larger but the same style) and Seabird (a converted naval tender?) at Lakes Entrance, and Blackbird on Lake Tyers (nearby, but not connected to the main five lakes). It cruised around the lower shoreline, to a tea room on the far side.

Competition arrived, with larger boats. The Peel fleet was behind the times.

Since then, Blackbird went to the Maribyrnong River (Melbourne), where it still cruises. Bluebird was reported to have gone to a south-coast NSW estuary, but I have heard nothing of its operation or survival. Seabird has vanished.

The fleet became the large catamaran (Thunderbird?), and a metal launch, similar to the wooden ones (Stormbird). This had been a press vessel when Perth hosted the America’s Cup. Today, Stormbird makes a regular lunch cruise to Metung Hotel; the other does longer cruises, probably to Paynesville. There are no longer cruises up North Arm, and the tea room at Comers Landing has been demolished. A winery runs its own ferry part way up North Arm.

At some stage, Bellbird was sold; the new owner converted it to solar electricity. It was running mainly circuits of the lake, with one trip per month up the beautiful Nowa Nowa arm.

The story becomes a bit confused. As far as I know it was onsold, but when I visited in 2006 I think that it wasn't running at all. It was offered for sale a second time, and that seems to be the one which has had it transferred to Sale.

The rivers there flow into Lake Wellington, one of the main Gippsland lakes, but also shallow and quite rough when the wind rises. There was a rumour a few years ago than Begonia Princess would be transferred from Lake Wendouree (Ballarat) to Sale, but that didn't happen. It is plying the refilled lake under a new owner.

Lake Tyers was formed by a sandbar, which was breached occasionally, resulting in dangerous conditions: a small boat could be carried to sea. The bar would then form again. The bar has now been cleared, and the lake is tidal. That may have forced Rubeena's relocation.

Further east, the replica PS Curlip plies the lower Snowy River and Brodribb River from their joint mouth at Marlo. Silting of the Snowy prevents the boat from reaching Orbost.”

You can read the Weekly Times article at http://bit.ly/1urGlYD (opens in a new window). 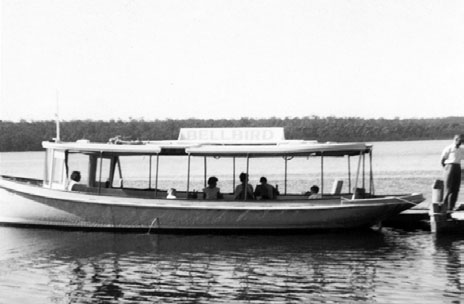