The continuing adventures of Slinky Malinky

Four hours work scrubbing the decks was a small price to pay upon finding Slinky Malinky sitting quietly on her outer mooring having been neglected for over six months. What a mess. The motor started up on second crank and we pushed our weed-covered hull into the seawall landing where the flying fifteens are launched from Esperance Bay Yacht Club. Here we would reside for a few days while some repairs effected, reprovisioning completed and the standing rigging replaced. It was a no brainer. The rig was 14 years old and I did not want to concern myself with a possible rig failure in the Great Australian Bight so we just did it. And I am glad we did.

Esperance is just one of those wonderful places that you stumble upon. My brother David and an old school mate Rob were made most welcome by members of EBYC. We went sailing with the cruiser fleet around the cans in a brisk easterly where racing was intense and no quarter given. Post race stuff was like at any yacht club and we partied on well into the night, leaving a subdued crew the following morning for a planned departure Eastbound through the islands of the Recerche Archipelago, a cluster of one thousand islands and rocks in a 200 mile stretch of what is largely unsurveyed waters. It is certainly not a place to sail through at night and we were again reminded just how good it was that there was a sea running so we could see the hazards to navigation.

We departed Esperance with steady NE winds which once we cleared Cape Le Grand headed us for a solid beat up the coast to the favoured anchorages of Lucky Bay, Hammerhead and Duke of Orleans. The offshore winds ensured that the nights were comfortable at anchor. The fishing was good as were the walks ashore. We saw no one but the occasional 4WD on the beaches. It must be a WA boy thing but why would anyone want to drive a perfectly good motor car along a beach?

At every anchorage we would climb the nearest hill with our phones and laptop in anticipation of a connection and thus the weather forecast. Cape Arid, 90 miles East of Esperance is a pretty desolate place, so aptly named by Flinders but our spot in a little bay for the night was delightful. Next morning we motorsailed over to Middle Island, our planned departure point for the passage across the GAB. We circumnavigated the island exploring little coves as the weather was benign and the fishing good.

My plan for the GAB had always been to leave on the back of a front. One was coming and it promised to be all we wanted, perhaps more than we wanted but here in the Southern Ocean you have to take what you are given. Or don’t go at all. The isolated Daw Island lies east of Cape Arid and about 45 miles from Middle Island. It is in uncharted waters but a Google map and an old mudmap confirmed an anchorage secure from the SW. After climbing a hill on Goose Island near Middle Island to get a weather update we elected to make a run for Daw Island. I thought we would get there before the forecast front arrived. We did, almost, after a beautiful kite ride for the first thirty miles in rising winds. Our entrance into the lee of the two little wave break islands protecting the anchorage was exciting with triple reefed main and a few rolls in the jib. There we lay out 50m of chain in a depth of 4m and sat out the blow. We weren’t going anywhere and so dined on freshly caught Bluefin washed down with a fine Shiraz.

Next morning the glass was low and the wind and seas high. It still looked angry so we waited. I knew my biggest hurdle was to make the decision to go. Once out there it was only going to ease... eventually. So we left and settled down to the serious business of an ocean crossing.

I had hoped we would be at sea for four nights and at worse five and after the first twenty-four hours we were well on track with a 160 mile day under triple reef and in squally and wet conditions. The autopilot could not cope so we had to steer. It was tiring, and noisy, but it did ease off as forecast and we then really settled into the routine of sleeping, eating and standing a watch, of sorts.

My charts, or lack of, showed a gap from Middle Island to Head of Bight. This was not an issue, as I had no intention of stopping anywhere enroute especially as it were to be a lee shore. I did however have on board a 1985 edition of the Jacaranda School Atlas and in it a full page spread of southern Australia complete with lines of Latitude and Longitude. More than enough for our ocean passage.

When the winds softened we motorsailed if only to ease the slamming and to maintain a reasonable speed. Most of the passage after the first day was on the nose or at best with sheets sprung, but although it was noisy with waves crashing into the hull we made good time. Then about 150 miles out from SA our outboard, which had been running like a Swiss watch made some strange noises. I shut down and decided to have a look in daylight.

Occasionally we would be teased with a zephyr for an hour before sitting again for six. Our course from Daw Island had been basically East-090-ish and as we crawled towards the SA coastline the winds backed from the S to the SE and then to the East so we dutifully followed. We were not going to make Port Lincoln but Elliston was a possibility, one that was soon dismissed as the winds played games with us and we drifted north.

Streaky Bay started to look promising, especially as it has a secure anchorage for a blow while we sorted the outboard motor. At one stage we were closer to Ceduna than to Streaky Bay but I was reluctant to give up more southing. The last 60 miles took us 36 hours and that was truly painful, but as we made landfall a 5 knot southerly allowed us to hoist the kite and tight reach East.

This was just so good and memory of our becalmed periods all but forgotten. The seas got softer and the skies cleared. The champagne sailing was a treat. We dropped the kite for the final 6 mile beat up through Blanche Port to the picture postcard township of Streaky Bay where we anchored just 100m off the beach in front of the pub. It was a very satisfying moment to reflect that we really had sailed across the GAB in a 28’ catamaran.

A shower, some Coopers Pale Ale and some oysters were on the agenda. Easy fix. Not so the outboard. But that is another story. 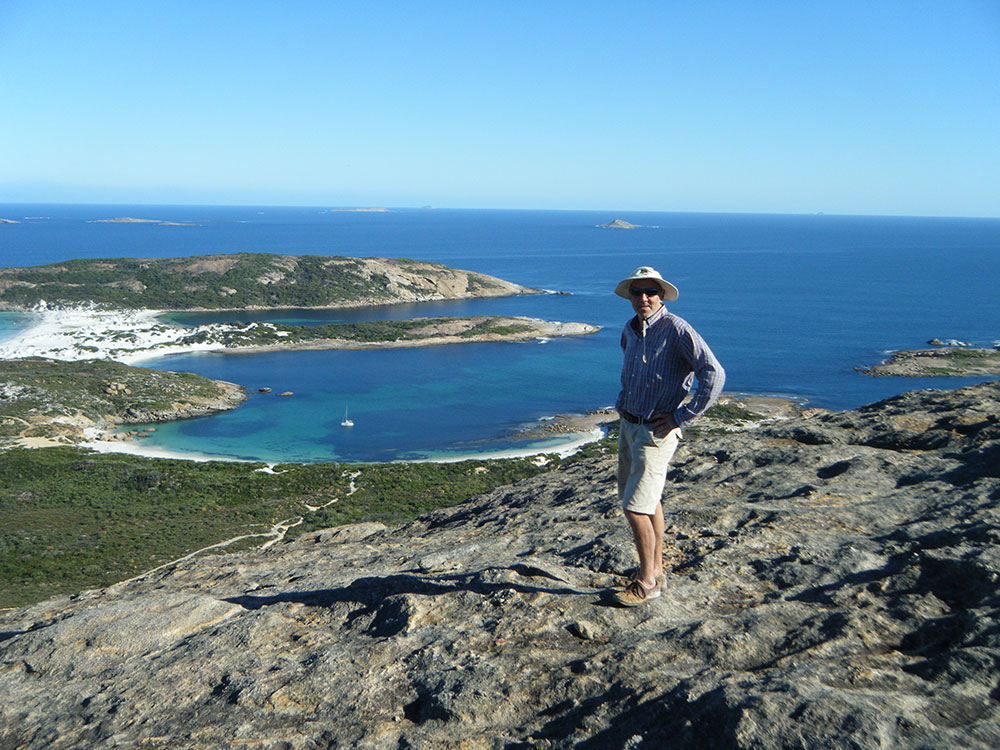