Oars! They’ve been around for a long time, as the pictured ancient Chinese and Viking oars show, and the stack of old oars alongside seems to indicate that the basic design hasn’t changed much over the centuries.

I’ve received pictures, presentations and thoughts from several members – and non members too; too many to put into one article, and so it appears that there will be more oar(some?) articles to come.

My own research indicates that the search for the perfect oar continues, however you may like to consider some of the historic designs before choosing an oar similar to everyone else’s! Those 4000 year old Chinese oars actually look pretty practical, and of course there are interesting oars from the Victorian period to be considered, as a search of the patents records shows –

Not exactly an oar, but designed for rowing none-the-less!   (http://www.rowinghistory.net/Patents/230,838.pdf ) 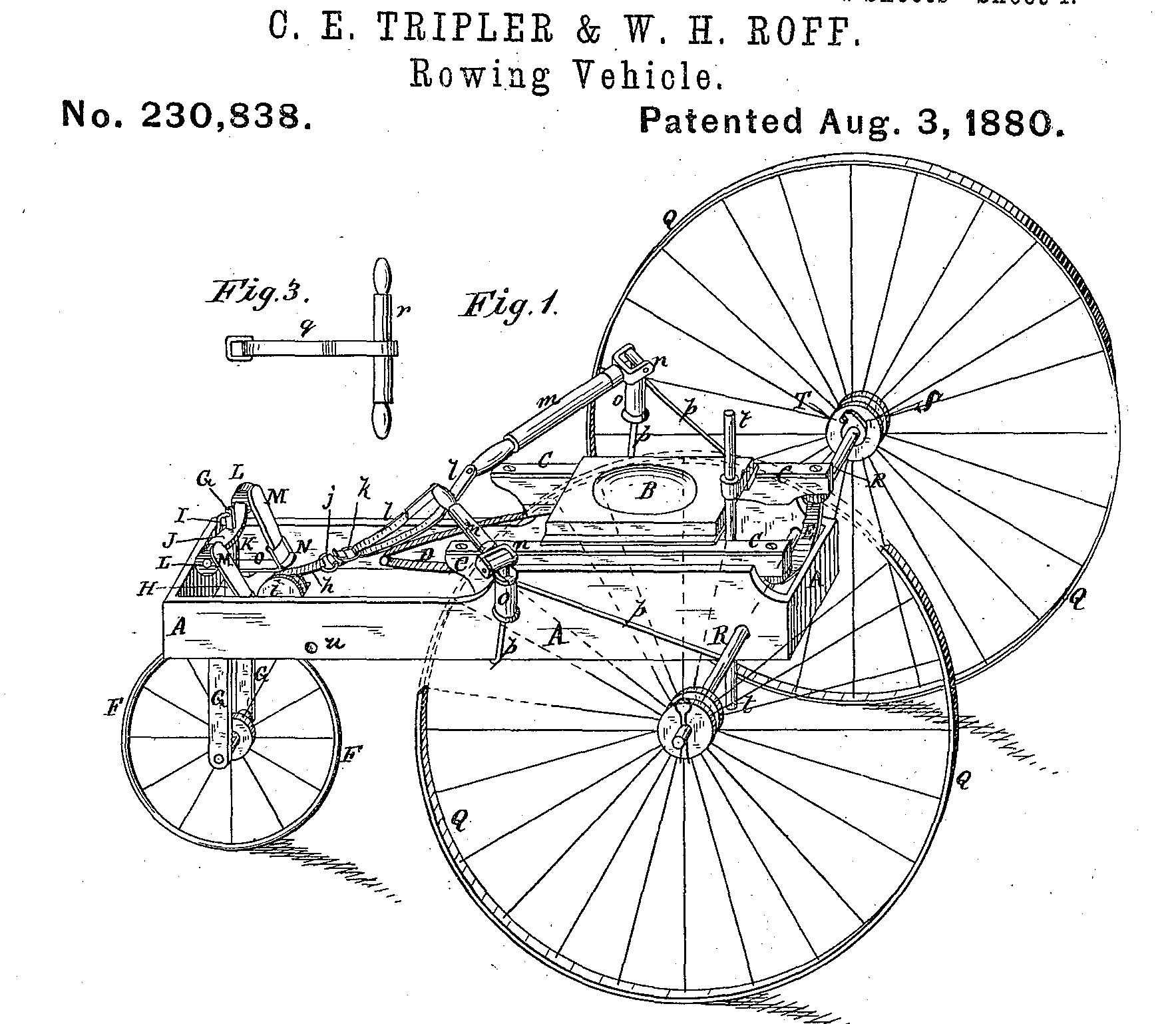 In the current era, John Murray is a man who still pursues the perfect oar for every person and describes himself as “born to row”.  You can read about John on his website at http://www.gacooarlocks.com/index.html .    I have used his oarlocks and “turbo blades” for some time and been very happy with them.

So what are we using for our boats?    I guess our preference is influenced a lot by the use we want to put them to – are we rowing a tender to our mooring, or do we have a recreational rowing craft the we may spend hours at a time in.   Do we want a work of art, or  a functional tool that makes life easier?  Or both??

These oars, are fine examples of oar design 100 years ago, were made by Greg Blunt for the Gallipoli TV series.   As well as being a life member of our Association, Greg is also an advertiser in Shavings, and can be contacted via the details on his advertisement. 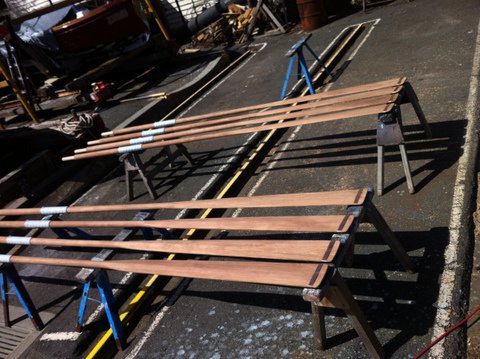 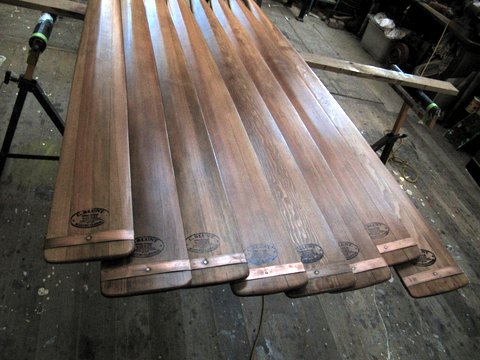 I have also received an “anonymous”  article on oars, and it’s reproduced here –

My thoughts on oars

Oars are levers that we use to row or scull a boat, but they also serve as poles to push off the bottom or keep the boat away from obstacles, such as a jetty, rock or another boat. They have to be able to take a lot of abuse.

I’ve made a few sets of oars, and my thinking has evolved. I started making them out of Oregon because I’d seen others had used the same wood and I had some pieces that could be laminated together to give the width of the blade. At first I thought a large blade would deliver more power because it had more resistance to moving through the water. Over time, I reduced the area of the blades and made them thinner. The initial aim was to get better balance but I’ve also found that they row better, perhaps because they are not as tiring to use.

Still seeking better balance, I took a pair of commercial oars that I had been given and scarfed a square section to the in-board end to add more weight. This also gave a shape that would not slide through the rowlock. Taking an idea from a book, the hand grip was shaped with a taper from the end to the point where the oar swelled into the loom (the loom is the bit between the handle and the blade). All this may seem like a lot of bother, but the reduction in weight, improvement in balance and comfort make it all worthwhile.

Commercially available oars are probably made from clear Radiata pine to judge by the grain and structure of the wood. They come with rubber sleeves to sit in the rowlocks, so what more could you ask for?

The rubber sleeves grab on the rowlocks rather than slide in them, and the oars try to climb up out of the rowlocks. My first experiment was to replace the rubber with leather, and I’ve not yet worn out the leather. I’ve not found a better solution, but have read of long-distance rowers using a plastic sleeve.

The next experiment was to replace some plastic rowlocks because a lot of the energy used in rowing was being dissipated by the bendy plastic. I tried bronze, but the model I tested had a short shank and wear enlarged the socket to a sloppy fit. Galvanised steel rowlocks fitted to a hole drilled into the oar pad worked better. Lubricated with mutton fat, they were low in friction and silent.

The original galvanised rowlocks were a bit larger than the diameter of the loom of my oars, so I wrapped the arms in cord and sewed on a leather lining. We’ve used a pair of these for about 12 years and haven’t worn out the leather yet. The picture shows some I’ve made recently for a new boat.

I did make a Chinese yuloh from a pattern published in Wooden Boat.   It pivoted on a pin at the back of the boat, with the blade behind the boat. The rower would stand facing across the boat, and swing the handle from side to side, adjusting the angle of the blade at the end of each stroke so it sculled through the water. Because the blade was always in the water, there was no wasted energy on the recovery stroke. The yuloh I made was a long oar, with a bend of about 10 degrees about one-third of the length from the handle. It was almost as long as the boat and weighed about 7kg, so it was just too awkward. For more information and plans for yuloh, see

Thanks to our un-named contributor for his thoughts, including his mention of sculling over the stern. In future editions I hope to mention shaft construction alternatives, blade shapes, rowlocks etc. and fittings,  sculling, and of course – forwards rowing,  all where possible featuring our members’ contributions.     (editor)