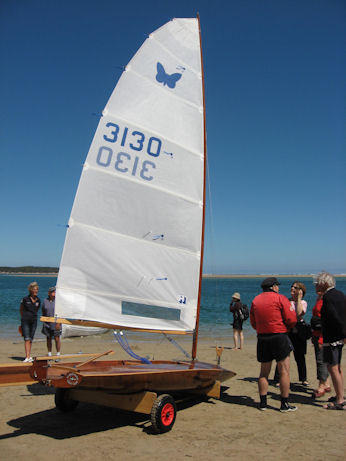 A big feature of this regatta was the collection of Sailfish dinghies that participated as a class. With eleven boats they were able to have a race start of their own and some keen competition for the lead in the race.

But the greatest highlight for the Sailfish owners was having the designer of the class, Jack Carroll, at the regatta. Jack designed and built the first Sailfish with Bruce Scott in 1961. Now, at 93 years of age, he is overwhelmed to see a fleet of Sailfish racing and boats that have not sailed for many years back on the water. The efforts of Greg Barwick, a WBA member, have been instrumental in bringing the Sailfish group together. Greg has made social media a force for good in connecting a crowd of people who all thought they had the “last Sailfish”.

Showing little sign of his age, Jack Carroll spent his time at the regatta walking among the boats, talking to people and having his photo taken. At the Regatta Dinner on Friday Night Jack proudly presented the Sailfish award to Greg, thanking him for his work in contacting people and getting them to Inverloch for this weekend. Greg’s boat “Bruce!” won the award for its authenticity and originality with cane battens and a matt finish varnished deck.

Although there were four Gwen 12’s at the regatta, two were on display in the hall and did not sail. The Gwen 12 award winner was Andrew Chapman with his boat “Flyaway”. As well as being the initiator and driving force of this regatta, Andrew has a magnificent collection of restored boats, “Flyaway” being the most recent addition. He sailed with his granddaughter as crew in the regatta race. 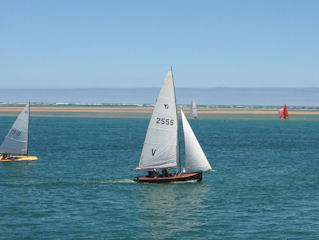 There were other boats at the regatta that WBA members would find interesting to see. Russell Kennery has written a book about the voyages of Matthew Flinders and gave a presentation on the topic at the regatta dinner. His boat “Trim” (named after Matthew Flinder’s cat) is a heavily built double ended 16ft clinker lifeboat built in 1913. With a heavy steel dagger board and gunter sloop rig, Russell sailed “Trim” single handed in the race. 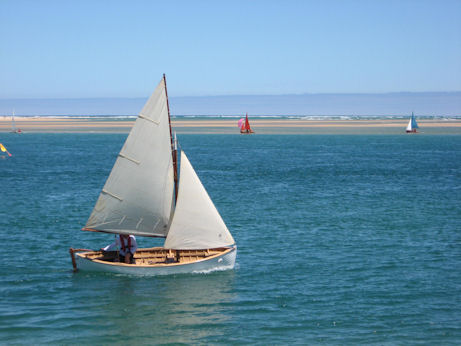 Reuben Kent sailed his Arch Logan designed Silver Fern class sloop “Gussie” in both the cruise and the race, attracting a lot of attention for the authentic restoration work on this pretty boat.

Steven Fankhauser once again sailed his 12 square metre Sharpie “Cheyenne” at the regatta, with a three man crew who worked like a machine to whip around the course. This boat is a masterpiece of restoration – as is my Mirror captured here in the foreground. 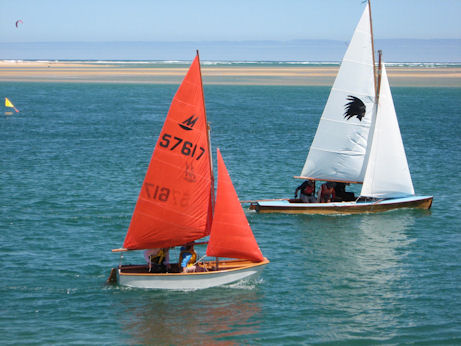 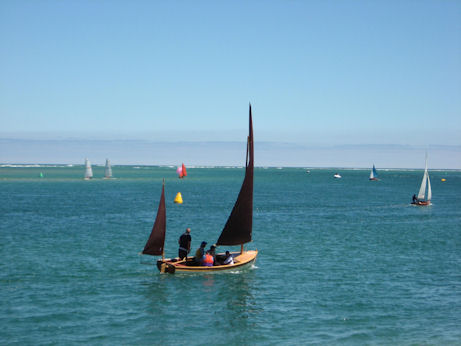 The winners of the four category awards were:-

Best Australian Design Dinghy - Frank Raisin’s 16ft Skiff “Crusader” for sailing in the regatta every year since its inception. The award recognizes the restoration done on this boat by John Fairfax, whose Victorian Classic Dinghy Network website is a must see. An iconic class of Australian racing dinghy.

Best Sailing Dinghy (not necessarily Australian Design) : Ralph Brown’s Heron “Sarie” for a boat that is sailed every week and has sailed in numerous Heron National championships and yet has beautiful varnish work (no paint). Ralph has built 6 Herons in a program for disadvantaged youth and is active in the Heron class association.

Best Moth - Graham and Harry Cox’s “Amber” for the rescue from ruin of a scow Moth, specifically for this regatta and just finished in time. The boat will now join the growing fleet of old Moths at APYC.

Best Sailing Boat (not a racing class) Russell Trennery’s “Trim” for such an authentic restoration of a very old boat. Bronze fittings, wooden blocks and natural fibre ropes are in perfect harmony with the traditional construction of this boat.

Next year will be the 90th anniversary of the birth of the Moth Class at Inverloch in 1927. The work of the designer Len Morris will be highlighted. We are expecting a large number of Moths at next year’s regatta.

Saturday, the third and final day of the regatta saw the boats on display in The Glade, the park near the Yacht Club. The People’s Choice award was won by Graham Sibson‘s Ian Oughtred designed Auk dinghy “Alice” which was built using timbers from his mother’s old furniture! The boat was dutifully named after his mother.

WBA President Andrew Campbell and his wife Hahn were at the regatta for the Regatta race on Friday to join the throngs of spectators and speak to participants. Tony and Linda Remington spent the day on Saturday viewing the boats on display in the Glade and the dinghies and model boats in the community hall.

The WBA made a $200 contribution to the finances of the regatta and as a junior partner in the management of the event, our WBA logo was on the regatta tee shirt given to every entrant. It is to be hoped that we might gain some new members from this involvement and that more WBA members may participate in future.