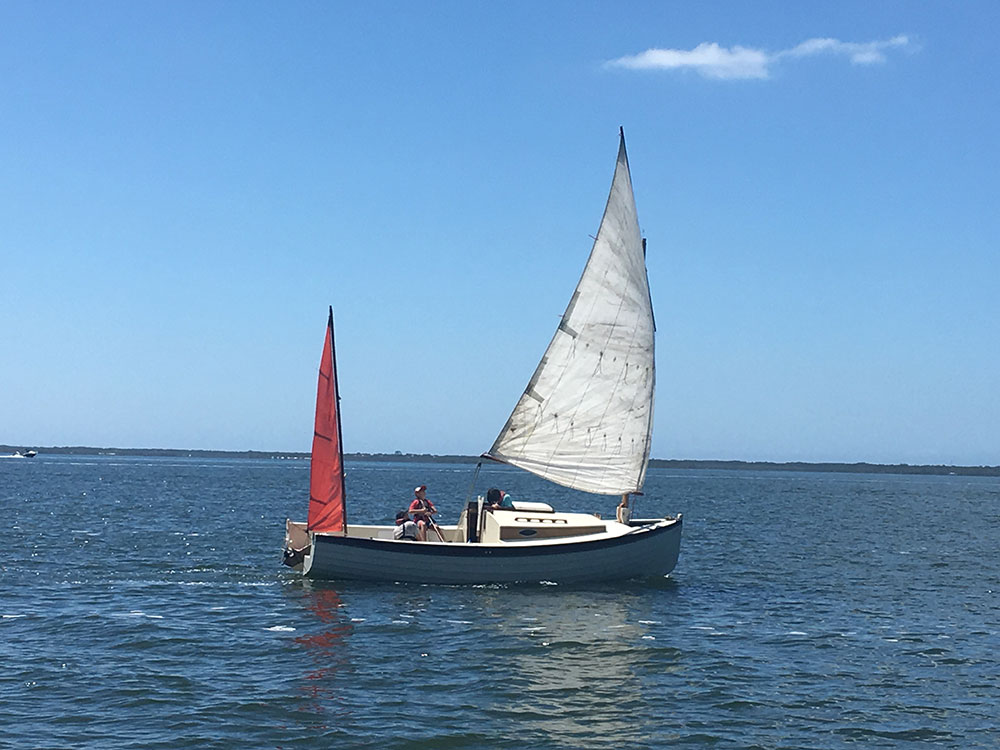 One of my boats is KHAOS, an acronym of  the first initial of the members of my family.  She is a Chebacco 25, designed by Phil Bolger and the first example of her design in the world, many examples of the smaller 19’ hull have been made in Europe, America and Australia.  I made KHAOS from glued 15mm marine ply in my shed over about 4 years of sporadic evenings.  Although the design is Bolger’s I had to work out a lot of the details myself as Phil died before the project was started.

The sail design is a lug yawl, and I even designed and sewed the sails.

I have mostly used her for camping trips – I would love to use her more but she only gets a few trips a year.

I am the custodian of the Chebacco website www.chebacco.com where owners and builders of Chebacco boats have told their stories and learnings since 1994 – it is a massive website and the Chebacco design family is the best documented Bolger design.

I love how she is so light to sail and tow – she runs downwind easily but isn’t as close winded as some of the race boats I meet on the bay.  The mast is unstayed and on a counterweighted tabernacle, so I can rig and launch her in about 5 minutes, faster than my son can launch his laser.  She is very stable, you can stand two grown men on the gunnel together without fear, but she has no ballast.  She only weighs about 750kg dry (which is a lot, but not much for a 25’ trailer sailer).

What would I change?  I put in a sealed cockpit but I should have raised the sole by 75mm and made it self bailing.  When sitting in the driveway without her covers the rain fills the cockpit and has to be bailed and sponged out.  In retrospect the 19’ version would have taken me half the time to build and would be easier to store  – maybe I will build one of them too – but don’t expect to see KHAOS in the for sale section of shavings, I love her.